The IFSC World Cup Back In Salt Lake.

The Crowd was buzzing with excitement. Only moments earlier, the innovative French 16-year-old Oriane Bertone had matched feet on the volume and hopped up to gain the next hold and eventually top the last boulder problem of the Women’s Bouldering Finals. Japanese athlete Miho Nonaka quickly followed with another graceful top, which probably wasn’t going to get her on the podium but still allowed her a strong finish. Austrian climbers Johanna Färber and Jessica Pilz both gave the boulder several solid attempts but were unable to stick the dyno.

Then Olympic climbing qualifier Brooke Raboutou took the stage. USA climbers Brooke Raboutou and Natalia Grossman (seeded first and second, respectively) had both topped the first three boulders of finals, and it was this last boulder that would determine their place on the podium. Raboutou attempted more static, controlled beta than the previous competitors, preferring to establish on the volume (a feat in itself) before trying to hop up to the higher hold. She managed to touch the hold a few times in eight attempts. With less than ten seconds left on the clock, she threw herself back at it for one more shot but still failed to secure the zone hold.

Natalia Grossman was the last female competitor. Having secured a third place win in last month’s Climbing World Cup, she continued to impress, topping every boulder in the semifinals (the only competitor, female or male, to do so). Trying more dynamic beta than her teammate, she also managed to touch the zone hold but not establish on it. After a couple attempts, she turned around and waved her arms to pump up the crowd and was met with immediate cheers.

As the clock counted down the last 30 seconds, Natalia took a deep breath, gathered momentum, flung herself at the hold… and stuck it one-handed. The crowd roared. As she scrambled up to the top with ease, earning herself first place in the Bouldering World Cup, the crowd rippled to give her a standing ovation and Brooke ran over joyfully to give her teammate a fierce hug. Every other female semifinalist soon followed, genuinely elated for their fellow climber, to share in Natalia’s triumph.

This electricity was in the air from the start. After cancelling almost all of the 2020 climbing competition season due to Covid-19, the International Federation of Sport Climbing (IFSC) hosted the first Climbing World Cup of 2021 in Meiringen, Switzerland last month. This past weekend was the second stop on the world cup tour in Salt Lake City, UT with the IFSC Bouldering World Cup, and the size and energy of the crowd was an obvious indicator of how much they missed climbing.

How does the IFSC World Cup work?

Athletes from all over the world traveled to SLC in order to compete for the Bouldering World Cup this past weekend and the Bouldering and Speed championship this upcoming weekend. The bouldering competition held this past weekend was divided into qualifiers, semifinals and finals. On Friday May 21st, over 100 climbers took part in the qualifying rounds, with women’s qualifiers in the morning and men’s qualifiers in the evening. On Saturday the 22nd both the semi-finals and the finals took place. The group of 50 was whittled down to 20 semi-finalists of each gender, with the women and men competing side-by-side at the same time throughout the morning. Scores and ranks reset between each stage of the competition and all new boulders are set. The six highest ranked climbers from the semifinals moved on to the finals held later that evening.

Climbers are ranked and scored through their tops and zones. First, climbers start on the taped holds. Each piece of tape signifies a limb that has to start on that hold. A hold around halfway through the boulder is labeled “Zone” and is marked with pink tape. This hold gives the climber points as long as they reach it in a controlled manner. The finish hold is labeled “Top” and has to be touched with both hands in a controlled finish for it to count as a top.

Attempts are counted, too. Any time a climber starts a climb, it’s an attempt, and boulderers aim to top out in as few attempts as possible. All climbers are seeing the boulders for the first time. Topping out on the first attempt is referred to as an onsight, and grants the climbers with the most amount of points they could earn. If you watched online, you may have noticed the bars next to each competitor’s name. The four bars represented the four boulders from each round. A half bar means they got to the zone hold, and a full bar means they topped the boulder.

17-year-old French climber Mejdi Schalck followed in second place, an impressive performance with three tops and one zone earning him his first spot on a World Cup podium.

The events that transpired around the Bouldering Finals really captured the magic of climbing. Natalia Grossman’s last second win as the crowd cheered for her as one was beautiful and overwhelming. Notably missing were chants of “USA!”. Instead the crowd hollered together in support of every athlete trying their best on the wall. After a long hiatus for both the athletes and observers from professional climbing competitions, the joy of coming together as a community and cheering on world-class athletes seemed to take precedence over pride and nationality.

Types of Climbing Holds & How to Use Them

There is a ton of new lingo to learn when starting to climb. It’s common for beginners to overhear a conversation between two climbers in the gym. 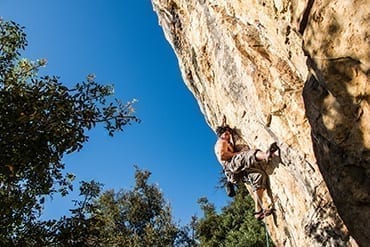 Whether you just started climbing at the gym, are already hooked and looking to train or get outdoors more..

An exceptional hangboard will provide climber’s with strenuous workouts and advanced training. These are the best hangboards..

Leave us some feedback, and let us know what you want to see next on the site.
Our primary goal at AdventureMedia.org is to foster growth in the outdoor community, and provide a platform for everyone, from beginners to long time adventurers. Along the way, through gear reviews, guides, and gear comparisons, we hope to give you an experience that travels with you from your laptop to the trails.