Skip to content
Home/Climbing/How To Choose a Belay Device

Types Belay Devices & How to Choose One

You’ve got your harness. You’ve got your climbing shoes. You may be ready to climb autobelays at your local gym, but if you’re climbing with a partner or going climbing outdoors then you’re also going to need a belay device.

A belay device is a piece of climbing gear that helps protect a climber by adding friction onto the other side of the rope. Historically, this was done with a hip belay; however, there are now plenty of belay devices on the market to warrant this practice outdated and unnecessary.

With so many different models on the market, it can be hard to decide which one to get or to even understand how they all work. Even if you’re set on a certain type of device, it’s important to understand what you’re buying and what it can be used for.

When choosing a belay device, you have three primary types to choose from:

Which one you choose depends on the kind of climbing you enjoy doing.

The Petzl GriGri is the most well-known assisted braking belay device, but Climbing Technology’s Click-Up, Edelrid’s Jul, the Mammut Smart, and the Black Diamond ATC Pilot also fall into this category.

They all work in different ways, but there is always a mechanism that helps cinch the rope, and another mechanism that allows for the rope to run through the device and the climber to be easily lowered (such as the lever on the GriGri or the orientation of the Mammut Smart).

The most popular type of tubular belay device is the Black Diamond ATC, which stands for Air Traffic Controller. Many other belay devices such as the Petzl Reverso and DMM Pivot are very similar in design and function.

Some tubular belay devices such as the ATC-XP and the ATC Guide, have teeth or grooves that increase the friction on the rope when belaying or rappelling. This feature allows for a smoother lower, more control over feeding the rope through the device when on rappel, and less effort necessary to hold a climber in place.

As mentioned earlier, some of these devices also can be used in Guide mode to belay from the top. A locking carabiner attaching the device to the anchor with an additional locking carabiner around the bight of rope means that the rope is auto-blocked off and the belayer can go brake hand free as long as they’re still pulling in all the slack as the climber is climbing.

The Figure 8 style belay device came next. However, these devices tend to twist the rope and there is no easy way to lock off the rope using them. They are still used as descenders but are rarely used for belaying and are not allowed in many climbing gyms.

Belaying Tips for the Beginner Climber

1. Be open to advice and criticism from more experienced climbers:

Often there are small adjustments you can make to reduce instances of short-roping (not feeding out rope to a lead climber fast enough), feed rope more smoothly, and overall provide a better belay experience for your climber. Don’t be afraid to ask questions!

Always provide an attentive and safe belay for your partner and expect the same for yourself to ensure a safe and fun climbing experience!

Which is the safest belay device for climbing?

Every belay device when used correctly with an active, attentive, and competent belay is safe. However, certain devices are safer than others in different scenarios. If for some reason a belayer loses consciousness (say due to rockfall or hitting their head when giving a catch), some assisted braking devices still cinch down on the rope and will suspend the climber whereas most tubular devices like ATCs rely completely on a belayer’s brake hand being on the rope at all times.

It’s also important to mention that some climbing gyms only allow assisted braking devices because they can help prevent accidents with new belayers.

When belaying a follower from above, an ATC Guide, Petzl Reverso, or DMM Pivot can be set up to lock on to the rope, which is a safer situation if the belayer becomes unresponsive.

However, these are unlikely scenarios and while they can potentially be a consideration, keep in mind that any belay device is better than the hip belay that was the norm in the 70s.

What equipment do you need to belay?

The very basics you’ll need are a belay device, a locking carabiner, a harness, and a rope. Different belay devices can be better depending on whether you’re top rope belaying or lead belaying.

A harness is necessary because you’ll belay off of your harness’s belay loop, and the belay device will be attached to your belay loop using a locking carabiner (in most cases you’ll need more than one locking carabiner if belaying a follower from the top of a climb).

The belay device will protect the climber tied into the other end of the rope. Typically you also need a partner, but there are self-belay devices that allow climbers to belay themselves up climbs.

How long does a belay device last?

This varies a lot depending on the device, how frequently it’s used, and what it’s used for. Generally you should be able to use belay devices for many many years.

However, if you use a device such as an ATC for rappelling frequently (a couple times a week), then the friction and heat of the rope will wear down the metal much faster. If you use your devices this often you should watch and feel for sharp edges on your belay device after a year or so to make sure it doesn’t damage your rope.

What is the difference between an ATC and GriGri belaying device?

An ATC is a tubular belay device while a Petzl GriGri is an assisted-braking belay device. The biggest difference is that, when catching a climber’s fall, a belayer using an ATC needs to keep their end of the rope in brake position and hold it tightly, while a belayer using a GriGri will have the assisted braking function and doesn’t need to exert nearly as much effort to give a catch.

They both have drawbacks and benefits as outlined in the article above. You can double rope rappel with an ATC but not a GriGri, and an ATC in Guide mode can be set up to auto-block the rope from the top.

GriGris are overall considered safer than ATCs for lead belaying and are less work for the belayers as the rope doesn’t necessarily have to be in brake position. 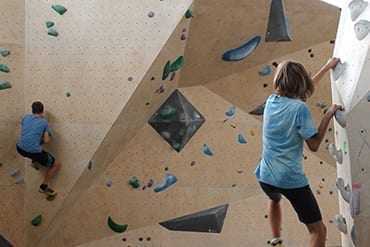 Types of Climbing Holds & How to Use Them

There is a ton of new lingo to learn when starting to climb. It’s common for beginners to overhear a conversation.

Whether you just started climbing at the gym, are already hooked and looking to train.. 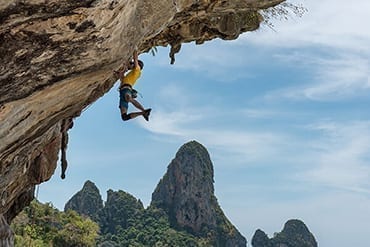 An exceptional hangboard will provide climber’s with strenuous workouts and advanced training. These are the best hangboards..

Leave us some feedback, and let us know what you want to see next on the site.
Our primary goal at AdventureMedia.org is to foster growth in the outdoor community, and provide a platform for everyone, from beginners to long time adventurers. Along the way, through gear reviews, guides, and gear comparisons, we hope to give you an experience that travels with you from your laptop to the trails.